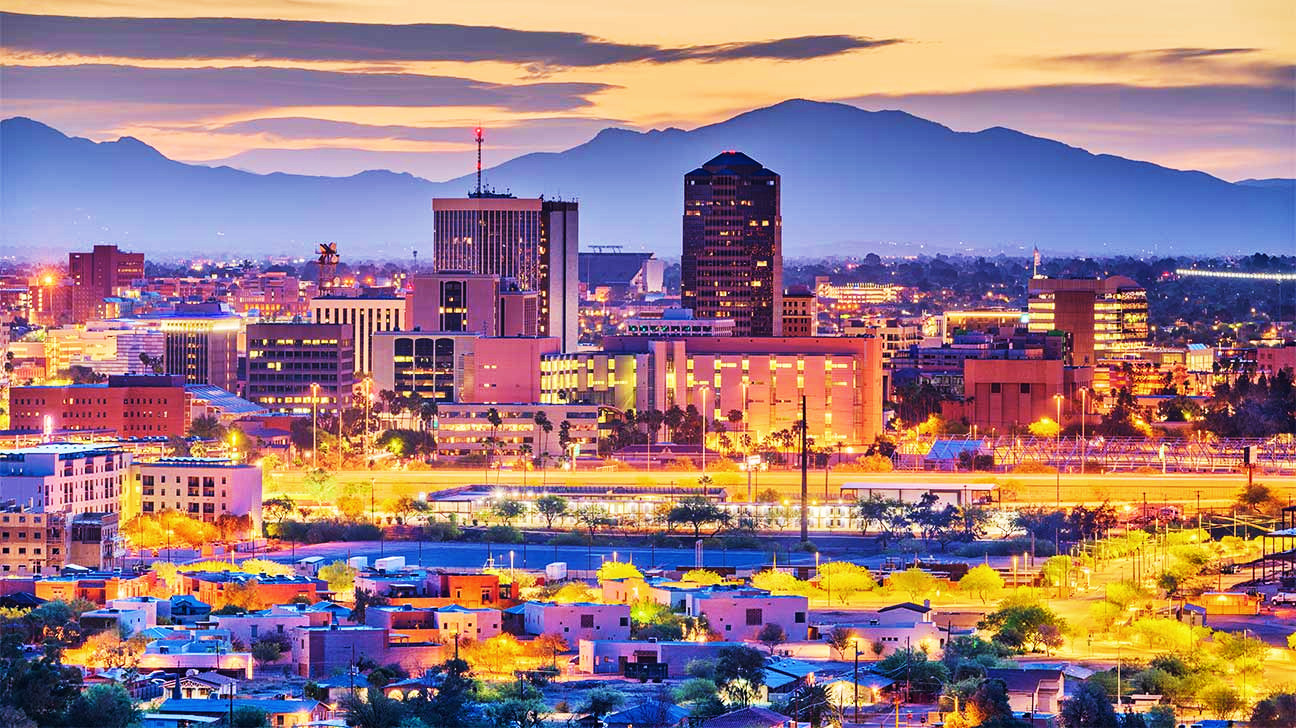 Arizona is, indeed, a fascinating place. The Grand Canyon State is full of wonders, but once, it was home to the bloodiest feuds in the 1800s. After the United States won the Mexican-American War, it became a part of the United States. In this article, you will learn about Arizona facts and map with its charming attractions.

Arizona is a paradisiac place in so many ways. Arizona’s cities get 85% of sunlight every year, but it also has 15% of forests covering the land. It is home to many prehistoric arts and tribes. Arizona is a beautiful state for admirers from all around the world.

This article is all about Arizona’s facts and maps with its dazzling attractions. It is the hottest state of the United Nations because of deserts. Moreover, it is home to 13 kinds of rattlesnakes and endangered Saguaro cactus that only grows in the Sonoran desert.

(Arizona Facts and Map with its Attractions)

Arizona is the southwestern region of the United States, and it is the 48th state in the Union. Arizona is the 6th largest and 5th most populous state. The Native Americans named the state Arisona or Arizona because of its mineral wealth.

The name Arizona means “silver-bearing” or “place of the small spring.” The state’s deep canyons have moderate temprature in summers and snowfall in winters. Arizona is well known for its “Great Canyon” and deserts. Arizona has a desert climate with scorching summers and mild winters. Arizona’s facts and maps, along with its attractions are mentioned below.

Phoenix, Valley of the Sun

The Phoenix is the capital of Arizona and lies along the salt river. It’s the most populous city in the state. Therefore, it plays a vital role in the economy of the country. Phoenix is a metropolis city. It is a seat of Maricopa county. The state’s climate is scorching, thus the nickname “Valley of the sun,” but now it’s quite bearable because of high tech companies. Their air conditioning made hot summers bearable and it is the 5th largest city in the United States. It is a major attraction for golfers and sun seekers in winters.

30 Notable Facts about Arizona You Should Know

Wondrous Attractions of Arizona You Must Visit

Arizona is full of incredible attractions. It has beautiful small towns and vibrant cities. Arizona, no doubt, is blessed with so many wonders of nature. It has natural sites, prehistoric art, Canyons, human-made wonders, and much more. Below are the top ten attractions. Therefore, browse through them to know which is attraction claims the number one position.

Jerome is in centra, Arizona. The Mine Museum states Jerome’s history as a booming copper-mining town. The Black hill of Yavapai County surrounds it. It was an old mining town that turned ghost town. In the past, Jerome had a very notorious reputation for his saloons, gambling, gunfights, etc.

Now it’s among the attractions of Arizona for tourists. The town has many quirky sites. Many buildings of Jerome town were renovated, but others are still standing in ruins. The Bartlett Hotel was one of the most beautiful hotels in Jerome but now stands still in ruins. It is a lovely place, and many day trips happen here. For night stays, hotels are also available.

Hoover Dam is one of the world’s fantastic engineering wonders and was constructed in 1931. It is a concrete arch-gravity dam in Balck Canyon; hence it is sitting in the colorado river. Colorado had been famous for its disastrous floods; thus, the barrier protects southern California and Arizona from those floods, and it provides water to irrigate farm fields. Hoover Dam holds back Lake Mead, which is the largest artificial lake in the United States.

You can walk or drive across the Hoover dam for free, but there are parking charges and tour charges, including the visitor center. The dam, expected to last for centuries approximately 10,000 years. But without human intervention, the dam’s turbines would shut down; thus, it won’t last more than two years. It is worth seeing the attraction.

Canyon De Chelly National Monument is an extensive national park. It is in northeastern Arizona. It has spectacular Native American cliff dwellings with steep-sided canyons. The key attractions of the monument are the Spider Rock spire and White House Ruins. Other attractive cliff dwellings are mummy cave and Antelope house.

In the mummy cave, actual mummies are found. The area is home to inhabited Native Americans for millennia. The area is full of prehistoric art. You can wander the monument at your own pace and drive along with the North and South Rim Drives. You can see ruins on pullouts, and they have scopes, so you can quickly pinpoint the ruins.

Bisbee is a fascinating and charming little town. It is in the Mule Mountains, far south of Arizona and, it is near the Mexico border. Before, it was a mining town, but after the mines closed, it became a ghost town; thus, it became home for squatters. Now it is a prosperous town with an eclectic mixture of citizens. The vast Queen Mine offers underground tours. The old miner’s cabins are now homes to many residences there. It is a heavenly place for artists and tourists. The mountains here overlook Mexico. Tourists take day trips here and stop at the Tombstone canyon from old Bisbee.

Petrified forest national park is in the painted desert. It is home to fossilized plants, reptiles, fishes, and large pieces of Petrified Wood. It is in northeast Arizona. These petrified woods come from large coniferous trees. These trees existed more than 200 million ago before the disastrous flood, and as a result, trees uprooted. The park has two different sections, which are vastly different from each other. You can visit the park in the day time as it has a specific opening and closing times.

Saguaro national park is the home of the saguaro cactus. It is an endangered species of plants. It is in southern Arizona. The park has two portions, thus the east and west side. The east side is more beautiful as it has more mountains, with a more scenic landscape, whereas the west side is lower in elevation and boasts a deeper saguaro forest. If you have less time, choose the west side. If you like hiking, the trail is in the eastern portion, where backpacking is allowed. You can be in prison for a year for cutting down endangered Saguaro cactus.

Glen Canyon National area, located in Utah, Arizona, has dramatic stone walls, picturesque landscapes, and a stunning blue water region. This place is mostly desert. It has one of the largest human-made lakes in the United States, Lake Powell. The area is infamous for water-based and land-based activities. You can explore the Glen Canyon National Recreation Area and its surroundings.

Antelope Canyon is in various art galleries, and it is sitting just outside Page. The canyon is within the Navajo Nation reserve boundary. The sandstone walls are twisted and sculpted. Visitors can visit on tour guides, but you can wander at your own pace after you reach there. The beams of light breaking through from the narrow openings light up the whole canyon; thus, the sandstone walls reflect the hues of red-orange and yellow beautifully.

Havasupai Indian Reservation, near Supai, is the 100 ft Havasu Falls. The fall is forked, so it appears like two waterfalls. The water in the base of Havasu falls has a bluish-green tint. It is home to some 450 Havuspai Indians, who live a secluded life. They are known as “the people of the blue-green water.” They created many waterfalls and basins. It is a paradisaic place to visit.

The Grand Canyon is a natural wonder. It is a symbol of Arizona. Its rocks are as old as time. It is impossible to be not impressed by this wondrous place. The layered bands of red rock reveal millions of years of geological history. The Grand Canyon formed 2 billion years ago from igneous and metamorphic rocks. Over 50 million tourists visit the grand canyon each year.

All the layers of the canyon are laid horizontally; therefore, it is no less than a wonder. You can experience a breathtaking view in the late afternoon sun. The walls of the canyon glow red and yellow with hues of orange and everything in between. You can never get over this scenic site.

Geography and Maps of Arizona

Arizona is in the south-west region of the United States. It is a warm state with mild winters. It does not often rain in the country due to air pressure, which sinks the air, and clouds are not formed. The government has mostly deserted land. The state’s elevation is about 4,100  ft (1,250 m). It is also the west part of the state and mountains.

Below we have the google map overview of the state to understand the state’s land and geography. You can see the diversity and landscapes of the state.

Here we have the printable version of the state for your ease. If you wish to print this, you can click and open it in a new tab, and press ctrl+P.

Following is the detailed map of Arizona for your better understanding of the state’s land.

Following is the detailed table for your ease in understanding the geography and maps of Arizona:

Arizona is known for its Grand canyon and deserts. Nature has blessed Arizona with a lot of wonders. It is a place for sun-seekers, and it is indeed a heaven for tourists. However, you can experience many breathtaking sites and attractions here, for instance. It is also very suitable for living because of its weather and mild winters. Arizona is the last state to join the Union, and it is a worth visiting place because it has Prehistoric sites, Canyons, and human-made wonders. Give it a place in your adventure bucket list, and you will not regret it. I hope you will be now aware of the map and lands of Arizona.